Elba’s name (“Ilva” for the Etruscans) means iron, and at that time anyone in possession of this metal held the key to dominance over other peoples: in 250 BC the Romans and the Etruscans went to war for sovereignty over Elba’s mines. The Romans’ victory spelt the end of the Etruscans, and Rome used the island’s iron resources to produce an abundant supply of weapons and achieve world dominance.

However, the iron mines were not really exploited to the full until the modern age, especially when the steel industry, with the blast furnaces at Portoferraio (until the last War), Piombino and Taranto, required huge amounts of ore. Capoliveri’s mines include Calamita, Ginepro and a small working called Sassi Neri, all belonging to the same Elban complex run from Rio Marina, a municipality where additional major iron ore deposits are located. For centuries, these mines were the main source of employment for Elba’s people, and especially for Rio Marina, Rio Elba and Capoliveri.

After more than 3000 years of working of the iron ore veins, in 1980 all mining stopped, even though there is still a great deal of iron available deep down below sea level. The Calamita and Ginepro mines are located one after the other, about 7 Km apart. They are accessed from Piazza del Cavatore along an unpaved road winding along a panoramic route of considerable beauty, with Corsica, Pianosa and Montecristo in the distance, and the seaside locations of Pareti, Morcone and Innamorata on the coast below.

After about 6 Km the visitor reaches Calamita, the biggest mine and worked by the open-cast method, mainly containing magnetite ore. There used to be several workings within the Calamita mine area: Vallone, Albaroccia, Nuova Zona, Macei, Civetta, Polveraio, Punta Rossa and Le Piane. Ore was extracted at altitudes varying from a few metres above sea level at Vallone to 280 at Macei. Before the advent of mining trucks, the ore was carried on wagons running on rails on the various levels, with inclined plains for transport from one level to another.

The ore was quarried by drilling, and before the arrival of the pneumatic drill this was done by hand, with the aid of a sledge hammer and chisel, after which the holes were filled with explosive (black powder). The ore was broken down into pieces with a sledge hammer and then shovelled onto the wagons by hand. Obviously, this was backbreaking labour.

The ore was loaded onto the vessels in the Innamorata cove, close to the Gemini islands, where the storage silos were installed with a long jetty that enabled the ships to carry out all the loading operations. The jetty was connected to the Vallone mining area by a railway that used to carry long trains drawn by a steam locomotive.

From the 1950s onward the installations were gradually modernised with the purchase of new machinery, excavators, crushers, bulldozers, pneumatic drills, new techniques for planting and exploding charges, ore cleaning and sorting plants, conveyor belts and a new jetty at Vallone. All these innovations certainly improved miners’ quality of life, but they were still at risk from the explosives, with even fatal accidents occurring, and silicosis, which meant that few of them worked through to retirement age.

After Calamita, it is about another 6 Km to the Ginepro mine. Here the area of outdoor workings is quite small because in the 1960s the decision was taken to start mining underground, with tunnels starting from 6 metres above sea level and running at various heights down to 54 metres below sea level. After the preparatory phase, full mining operations were begun in 1970 with a hoisting shaft complete with automatic equipment and a cage also capable of transporting staff. The plant, built by German engineers, was the most modern in Europe at that time.

54 metres below sea level the mine had a large crusher to break up the ore, from which modern motorized wagons operated to and from the loading points, where pneumatic power shovels collected the ore mined earlier from the passes underneath the hoppers. Once outside, the container-cage unloaded the broken-up ore into large storage bays, with a conveyor belt about 300 metres long running underneath them to carry the ore straight to the magnetic sorting system.

Since the mines were shut down the hoisting shaft and tunnels have been mothballed.

The Ginepro mine was rich in ilvaite, garnet, tourmaline and epitode. Finally comes the Sassi Neri mine, on the eastern part of the Capoliveri coastline between Straccoligno and Ginepro, accessible on foot from Calanova or more easily by sea. Work at this mine, rich in magnetite, epitode, white and green adularia and black tourmaline, began in 1935 and ended in 1960.

However fascinating, the idea of visiting the inside of the iron ore deposits is not possible because access is forbidden for safety reasons. Visitors have to be satisfied with examining the external ore processing facilities, real open-air workshops. There are no longer miners to be found there, since working has finished, but they are a major attraction to collectors and researchers. The abandoned workings are the ideal place for anyone wishing to experience a striking, highly coloured landscape with the silence of ancient places, locations that still have their own wild strength and give a fascinating insight into the origins of our planet, as well as reminding us of the hard life of the miners of times gone by. 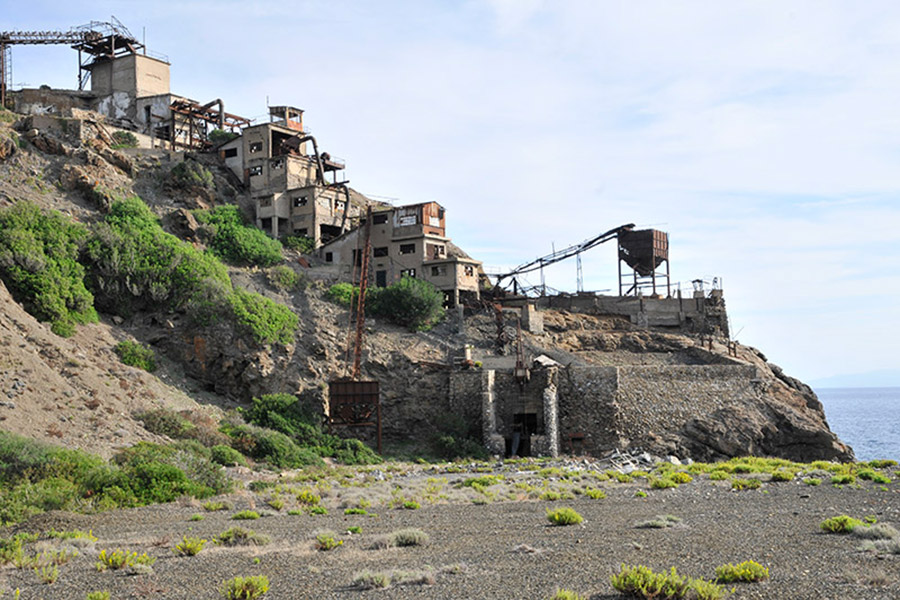 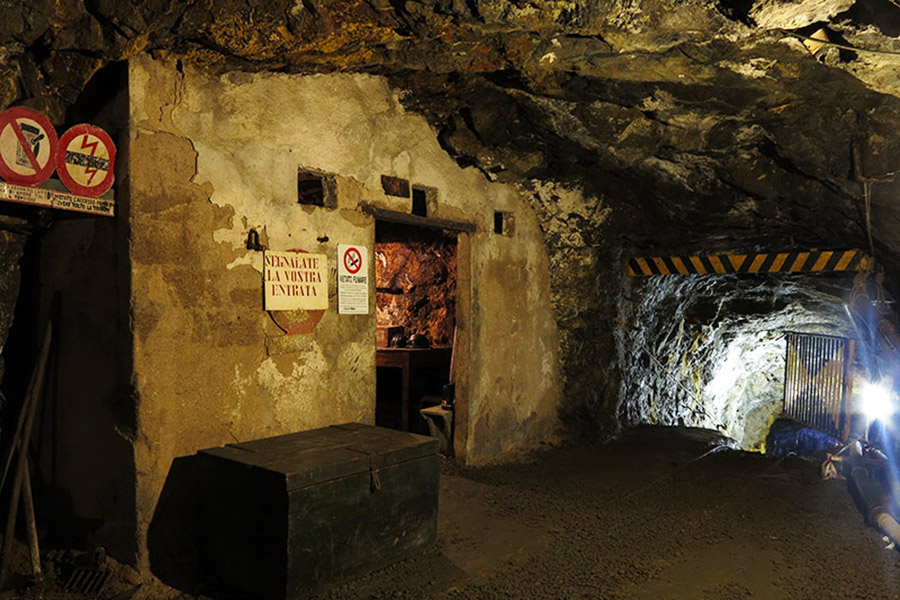 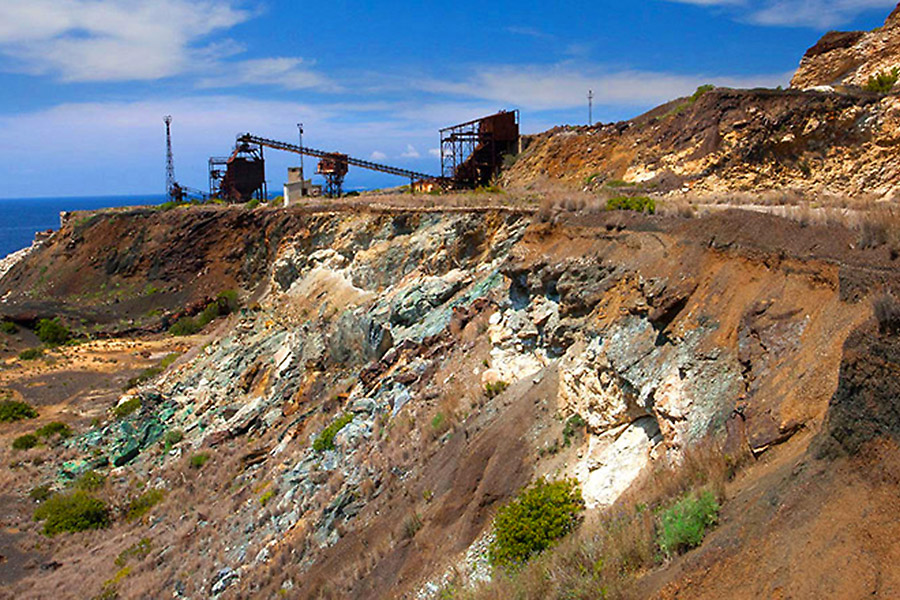 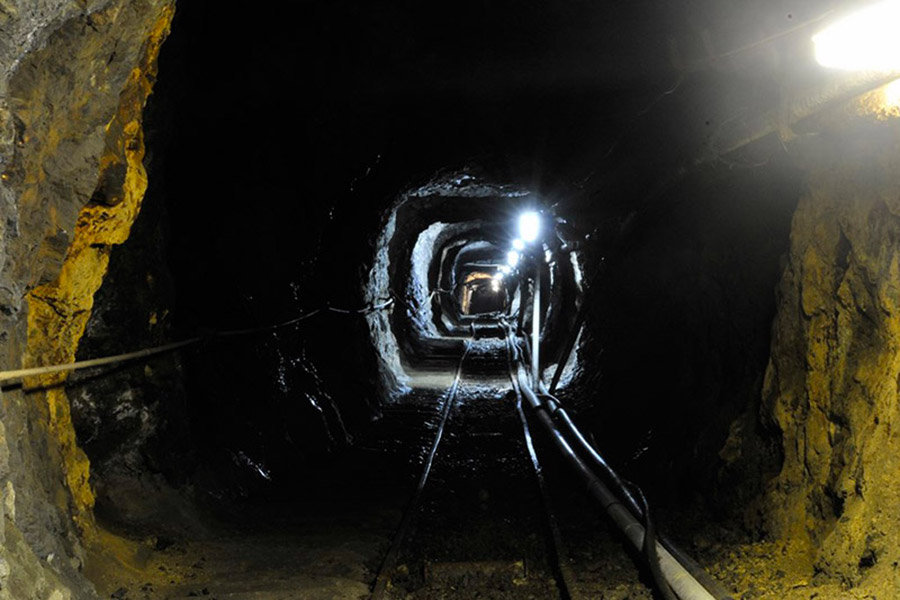 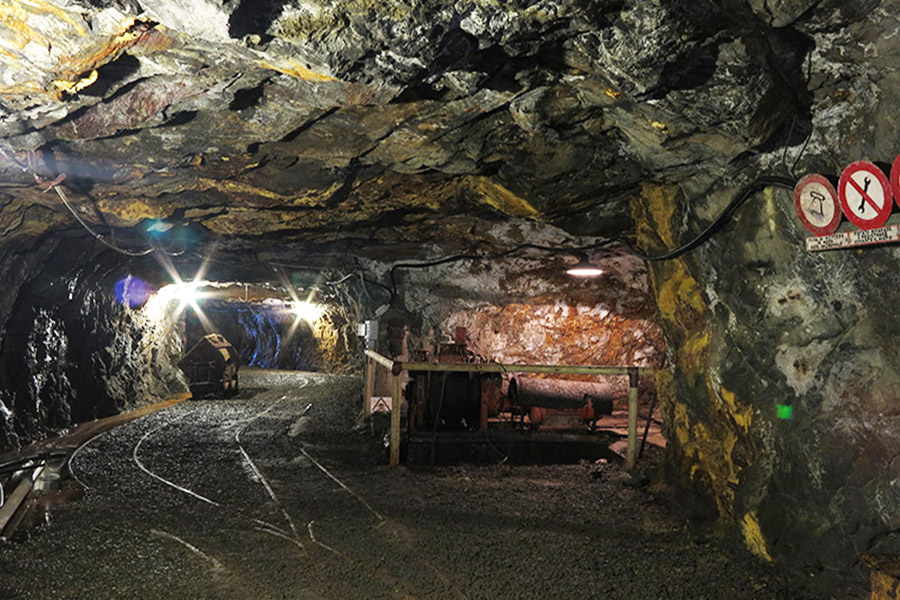